In the first quarter of 2021, Canadians took over 27.1 million trips both within Canada and abroad, which was significantly down compared to the same period in 2019, according to a new report released Friday by Statistics Canada.

The federal agency said the total number of trips made by Canadians from January to March of 2021 was less than half (42.7 per cent) the total made during the same period in 2019. In 2021, almost all (98.4 per cent) of these trips were domestic, while before the pandemic, roughly 15 per cent of trips were to the United States or overseas destinations.

“With nearly nine million fewer trips abroad by Canadians in the first quarter, tourism spending abroad was down 92.7 per cent compared with the same quarter in 2019,” said the report.

“In 2020, travel and tourism was among the first and hardest-hit sectors of the economy as a result of restrictions to contain the spread of COVID-19. The first quarter was stunted by the mid-March pandemic declaration and travel during the second quarter came to a near standstill. While some public health restrictions were eased in the third quarter, travel restrictions remained in effect and were tightened in many provinces, resulting in a lacklustre fourth quarter,” explained StatsCan. 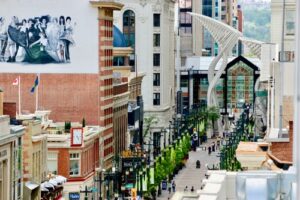 “Business-related travel, including attending conferences or regular sales, as well as other non-routine services, fell 84.3 per cent from 2019 to 96,200 trips in the first quarter.”

Canadians spent an average of $1,594 per trip in the United States during the first quarter, up from $931 during the same quarter of 2019.

However, despite this increase in average spending, the total spent on accommodation and in restaurants and bars— the two largest expenses for Canadians travelling to the United States—fell sharply during the first quarter. Compared with the same period in 2019, spending declined by 96.7 per cent to $199.1 million and by 95.7 per cent to $126.2 million, respectively, said StatsCan.

Only 207,800 Canadian residents returned from trips to countries other than the United States during the first quarter of 2021, down 93.7 per cent from January to March of 2019, it said.