Following a 1.2 per cent decline in July, manufacturing sales in Canada increased 0.5 per cent to $60.3 billion in August, on higher sales of petroleum and coal (+7.3 per cent), chemicals (+6.3 per cent) and primary metals (+3.3 per cent), says Statistics Canada.

In a report released Thursday, the federal agency said sales of wood products (-17.1 per cent), motor vehicles (-8.7 per cent) and motor vehicle parts (-10.5 per cent) declined the most.

On a year-over-year basis, total sales were up 14.9 per cent in August.

“Petroleum product sales rose 7.3 per cent to $6.6 billion in August, the third consecutive increase and the highest level since May 2019. Higher prices and volumes sold contributed to the gain. Sales in constant dollars rose 4.3 per cent. Exports of refined petroleum energy products rose 5.6 per cent in August, partially on higher demand from the United States,” said the report.

StatsCan said total inventories increased 2.1 per cent to a record high $96.2 billion in August, driven by higher inventories of plastic and rubber (+14.2 per cent), chemicals (+6.0 per cent) and food (+2.4 per cent).

In Alberta, manufacturing sales in August of $4.9 billion  were down 4.1 per cent from the previous month but they were still up 12 per cent from a year ago. 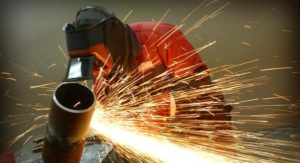 Omar Abdelrahman, Economist with TD Economics, said the broad-based increase in Canada’s manufacturing sales in August is welcome news. Together with recent positive data (for instance, September’s Labour Force Survey report), Canada’s economy appears to be on track to record a solid rebound in the third quarter, he said.

“However, the manufacturing sector still has significant lost ground to make up. Looking past the monthly noise, sales volumes have exhibited a zigzag pattern since the beginning of the year. Shipment volumes remain far detached from their recent peak reached in March, let alone their pre-pandemic levels,” he said.

“Sentiment has displayed notable resilience, as evidenced by PMI readings that remain comfortably in expansion territory in both Canada and the U.S. Supply chain disruptions are the culprit, with global semiconductor shortages materially hitting output in the auto industry globally and in Canada. These supply constraints are taking time to dissipate, and are becoming more widespread beyond the semiconductor industry. On this note, spiking energy prices and reports of power shortages in some economies present further downside risks.”