At the beginning of 2021, 32 per cent of Canadian employees aged 15 to 69 worked most of their hours from home, compared with four per cent in 2016 with 3.1 million Canadians working from home temporarily in response to the COVID-19 pandemic, according to Statistics Canada.

The federal agency, in a report released Thursday, said of all new teleworkers, 90 per cent reported being at least as productive, i.e., accomplishing at least as much work per hour, at home as they were previously at their usual place of work.

“The likelihood of accomplishing more work per hour varied across industries. For example, the percentage of new teleworkers who reported doing more work per hour was relatively high in public administration (41 per cent) and health care and social assistance (45 per cent). In contrast, the corresponding percentage amounted to 31 per cent in goods-producing industries.” 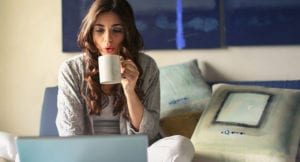 “Furthermore, virtually none of the workers who accomplish at least as much work per hour at home as they did previously now work shorter hours per day,” it said.