Although historically low, the number of international arrivals to Canada during July increased from the same month last year, according to a new report released Wednesday by Statistics Canada.

The federal agency said travellers from overseas countries made 63,700 trips to Canada in July, more than double compared with July 2020, but still down 94.2 per cent from the pre-pandemic levels of July 2019.

“While the ban on non-essential travel across the Canada-US border was extended on June 21 for another 30 days, more cross-border traffic was expected with provincial re-openings and the federal easing of requirements for international air travellers,” said StatsCan.

“As of July 5, mandatory testing upon arrival with a hotel stopover as part of a 14-day quarantine—which had been in force since February—was no longer required of fully vaccinated air travellers currently eligible to enter Canada.” 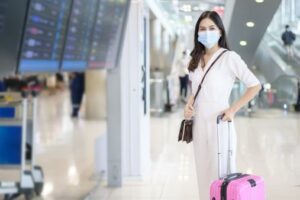 Statistics Canada said the number of residents from overseas countries arriving in Canada rose to 63,700 in July, up from 28,400 in July 2020. The July 2021 figure represents 5.7 per cent of the 1.1 million overseas arrivals in July 2019, before the pandemic.