Investment in building construction in Canada was down 1.7 per cent to $18.1 billion in July, according to a report released Monday by Statistics Canada.

It said residential construction investment was down 2.6 per cent in July, a third consecutive monthly decline after a sustained period of strong growth from May 2020 to April 2021.

“Declines in all provinces brought investment in single-family homes down 4.0 per cent to $7.2 billion. Ontario posted the largest decrease after reaching a record high in April 2021, followed by Quebec, Saskatchewan and Alberta,” said StatsCan. 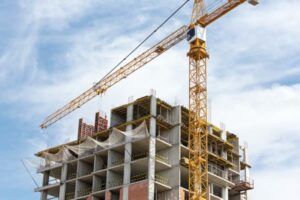 “Multi-unit construction investment was down 1.0 per cent to $6.2 billion in July, reflecting decreases in seven provinces. Ontario reported the largest decline, followed by British Columbia and Manitoba.”

The federal agency added that non-residential construction investment was up 0.9 per cent in July to $4.6 billion.

“Institutional investment posted its ninth consecutive increase (+2.2 per cent to $1.3 billion), with the majority of provinces and territories reporting gains in July. Construction of a York University building in Ontario as well as ongoing construction of secondary schools in Quebec and British Columbia contributed to the national growth,” it said.

“Commercial investment was up 0.6 per cent to $2.5 billion in July. Alberta posted the highest increase (+6.0 per cent) due to higher spending on office buildings and buildings for trade and services.

“Industrial investment was the single component to post a decline in July, edging down 0.2 per cent. Quebec decreased for a second month, while Alberta and Prince Edward Island also had notable declines.”