Overall activity in the Calgary industrial market has continued to remain resilient with the continuation of strong market fundamentals, coupled with heightened demand throughout the industrial market as a whole, says a new report by commercial real estate firm Colliers.

The company’s third quarter report said vacancy has dropped to 4.78 per cent. That’s down 30 basis points from the previous quarter and down 154 basis points so far this year.

“The large-bay segment of the market, supported by the strong momentum in the distribution / logistics sector, has benefited from the majority of this market activity. Many landlords who completed shorter term deals throughout the early stages of the pandemic are now working with these same occupiers to complete and secure longer-term deals through their respective portfolios,” said the report.

“We are still also seeing the lasting effects of the heightened demand for consumer goods, as a prominent e-commerce retailer broke ground on three separate purpose-built distribution facilities totaling around 4.0 million square feet throughout the third quarter of 2021. Although the focus in Calgary is predominantly on large format distribution/ logistics centered real estate, the demand for owner / occupier facilities and manufacturing shops remains significant, as we are seeing increasing interest on both the sales and leasing side of this segment.” 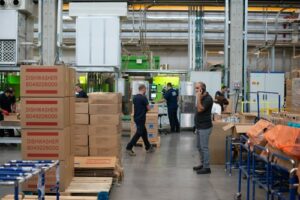 The report said absorption in the quarter was driven mainly by increased market wide transaction activity throughout all of the industrial districts in the greater Calgary area.

“One of the most notable themes from the third quarter of 2021 is the immense amount of inventory under construction throughout the city and the surrounding area. There is currently 6.7 million square foot of industrial projects underway, with the majority of this being developed in the southeast industrial market. Approximately 67 per cent of all projects under construction are purpose-built and focused on e-commerce and consumer goods distribution. These projects have been subject to inflated construction and building material costs, especially steel, which is experiencing some of the highest pricing on record,” said Colliers.

“Strong demand from occupiers in the market and confidence in the development community has helped spur the new construction cycle; however, unparalleled increases in construction and building material costs, along with growing land values and property tax, will result in increased rental rates that will be allocated back on tenants. As foreshadowed in our Q2 report, we are witnessing a surge of industrial investment sales activity due to pent-up demand from investors seeking yield, desirable fundamentals, and the competitive landscape relative to the M.T.V. (Montreal, Toronto, Vancouver) markets.”