At the end of October, the results of the first competition at the Alberta Spirits Awards were quietly released.  Amongst the participants, Bridgeland Distillery from Calgary received multiple medals for their products, and as an outcome was crowned “Distillery of the Year”.  They won gold in the Whisky, Brandy, Amaro, Packaging and Distillery categories, while they received bronze in the Bottled Cocktail category.

The craft distilling industry in Alberta has been burgeoning with new players entering the market every year since 2014.  It’s a very organized group which formed the “Alberta Craft Distillers Association”, with Ross Alger as their president.  “The craft distillery industry has been growing exponentially since its beginning in 2014.  With almost 50 distilleries in Alberta, the industry has been very well received and supported by the consumers across the province.  The Alberta Spirit Awards is an excellent showcase of the diverse products that are being made by the distillers in this part of the world.  With such a young industry, there’s a lot more exciting opportunities to come, and we should see some really exceptional products getting released in the next five years as the whisky currently in barrels matures and is bottled.” says Alger, regarding the importance of this competition.

For Jacques Tremblay and Daniel Plenzik, owners of Bridgeland Distillery, the Distillery of the Year Award represent a validation along the way of what they’ve been working towards for the last three years.  “It takes a long time for people to know about your product, to try your product, to believe in your product, and to convert to your product. We’re three years in and people are finally saying, I’ve heard of this, I’ve seen this, I’ve tried this, I love this, and I buy this” says Plenzik about the challenges associated with a new brand.

Innovation has always been at the centre of everything they do.  From the unusual coiled lyne arm of their pot still they designed, to the unique usage of virgin casks in the initial aging stage of their single malt.

The two craft entrepreneurs have set the bar high when it comes to product quality.  “We are guided by what we enjoy as consumers.  The ultimate test is always asking ourselves :“Would we buy this, at this price?”  If the answer is No, then we don’t release it” says Tremblay.

“We run a very thorough and objective sensory analysis on all our products at every stage of its production.  It’s exciting when we can find the unique bouquet and flavours in the complexity of the final product.  It is as though all the single notes come together in harmony,” explains Plenzik.

When you factor in the pandemic, the distillery is close to the financial projections that was made three years ago.  “It’s clear that we are not exactly where we wanted to be in terms of profitability, given the context, but the last six months have been encouraging with external sales to liquor stores and restaurants increasing as close relationships could be developed with the province having a better hold on COVID,” explains Plenzik.  “Being given this high recognition by this respectable competition establishes our reputation, however the ultimate buying decision is always made after tasting the products.  It is true for consumers, but also for liquor store managers and restaurant beverage directors.” reveals Tremblay. 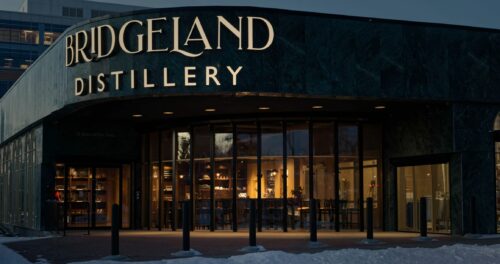 “Because 80 per cent of our production goes in the aging room for a period of three years or more, it presents a cash flow challenge that we are trying to solve every day by finding ways to have our customers engaged and spending with us,” says Plenzik.   The duo came up with innovative levels of membership for people to receive a sample of the spirits aging, at set intervals.  Their latest unique membership offering being their Taber Corn Berbon cask club. This gives the buyer a chance to try some exclusive products only available to Cask Club members such as their Cask Strength Berbon and first ever “Straight” Berbon Bridgeland Distillery will release in March 2022. 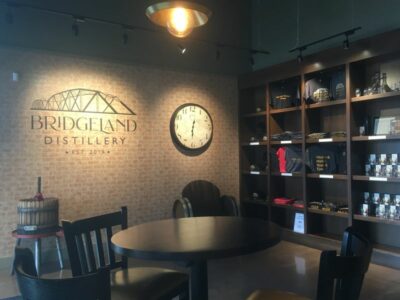 “We have been in heads down mode,  executing and focusing on product development for the last three years.  It’s great to receive this thumbs up, telling you that you’ve been on the right path all along,” explains Tremblay.  “We’re on this path, but it’s not a destination yet.  We want to continue to release the best products when it comes to Brandy, Whisky and Eau De Vie.  We’re only at the start of a long story when it comes to Bridgeland Distillery!  Our Single malt will be released in mid 2022 and will pave the way for our whisky program with many products planned over the next years, using different local grains such as wheat and oats,” concludes Plenzik.