The Bank of Canada announced Wednesday it will hold its target for the overnight rate at the effective lower bound of ¼ percent, with the Bank Rate at ½ percent and the deposit rate at ¼ percent.

“The outlook has improved for both the global and Canadian economies. Activity has proven more resilient than expected in the face of the COVID-19 pandemic, and the rollout of vaccines is progressing. A number of regions, including Canada, are experiencing a difficult third wave of infections and lockdowns. The more contagious variants of the virus are straining healthcare systems and affecting hard-to-distance activities, and have introduced a new dimension of uncertainty. The recovery remains highly dependent on the evolution of the pandemic and the pace of vaccinations,” said the Bank in a report.

“Global economic growth is stronger than was forecast in the January Monetary Policy Report (MPR), although the pace varies considerably across countries. After a contraction of 2 ½ per cent in 2020, the Bank now projects global GDP to grow by just over 6 ¾ per cent in 2021, about 4 percent in 2022, and almost 3 ½ per cent in 2023. The recovery in the United States has been particularly strong, owing to fiscal stimulus and rapid vaccine rollouts. The global recovery has lifted commodity prices, including oil, contributing to the strength of the Canadian dollar.

“In Canada, growth in the first quarter appears considerably stronger than the Bank’s January forecast, as households and companies adapted to the second wave and associated restrictions. Substantial job gains in February and March boosted employment. However, new lockdowns will pose another setback and the labour market remains difficult for many Canadians, especially low-wage workers, young people and women. As vaccines roll out and the economy reopens, consumption is expected to rebound strongly in the second half of this year and remain robust over the projection. Housing construction and resales are at historic highs, driven by the desire for more living space, low mortgage rates, and limited supply. The Bank will continue to monitor the potential risks associated with the rapid rise in house prices. Meanwhile, strong growth in foreign demand and higher commodity prices are expected to drive a robust recovery in exports and business investment. Additional federal and provincial fiscal stimulus will contribute importantly to growth.” 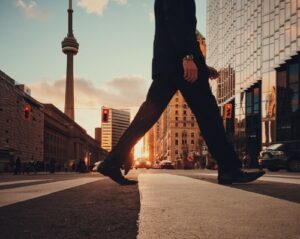 Sri Thanabalasingam, Senior Economist with TD Economics, said there were no big surprises with the Bank’s rate decision on Wednesday.

“There’s no question the economy has been outperforming the Bank’s expectation recently, necessitating the removal of some monetary stimulus, but at the same time, the third wave is injecting uncertainty in the forecast,” said Thanabalasingam. “That said, given the resilience shown by the economy so far through the pandemic, the Bank decided to change up the forward guidance by pulling forward when it expected economic slack to be absorbed from sometime in 2023 to the second half of 2022. This was an act of transparency by the Bank, founded in the upgrade to its economic forecast in spite of the current third wave of the pandemic.

“The Bank of Canada will be watching vaccine and virus developments closely. The speed of the economic recovery is dependent on vaccines winning the race against COVID-19 and its variants. This is the key downside risk in the Bank’s projection and bad news on this front could see the Bank delay its plans for when monetary policy will normalize.”

While “the outlook has improved for both the global and Canadian economies,” the Bank still sees “considerable excess capacity” and, as a result, “the recovery continues to require extraordinary monetary policy support,” said ATB Economics in its daily economic update The Owl.

Despite the better-than-expected growth in Canada during the first quarter, “new lockdowns will pose another setback and the labour market remains difficult for many Canadians, especially low-wage workers, young people and women”, said ATB.

“The Bank expects the inflation rate to rise, but only temporarily due to short-term effects related to the pandemic and higher gasoline prices.